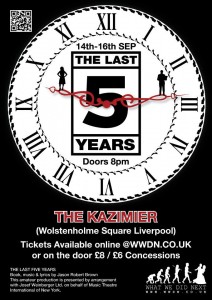 The Last Five Years is a one-act musical written by Jason Robert Brown. It premiered in Chicago in 2001 and was then produced off-Broadway in March 2002. Since then it has had numerous productions both in the United States and internationally.

The story explores a five-year relationship between Jamie Wellerstein, a rising novelist, and Cathy Hyatt, a struggling actress. The show uses a form of storytelling in which Cathy’s story is told in reverse chronological order (beginning the show at the end of the marriage), and Jamie’s is told in chronological order (starting just after the couple have first met). The characters do not directly interact except for a wedding song in the middle as their timelines intersect.

Where: The Kazimier, Liverpool

Photos from The Last 5 Years can be found here.