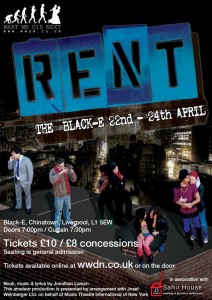 Jonathan Larson’s rock musical based on Giacomo Puccini’s opera La bohème. It tells the story of a group of impoverished young artists struggling to survive and create in New York City’s East Village in the thriving days of Bohemian Alphabet City, under the shadow of HIV/AIDS.

WWDN completed their production of the musical RENT, written by Jonathan Larson, which tells the story of a group of impoverished young artists and musicians struggling to survive and create in New York’s Lower East Side, under the shadow of AIDS.

What We Did Next is the first theatre company to be granted the rights to present the full stage version of Jonathan Larson’s hit musical, RENT to Merseyside.