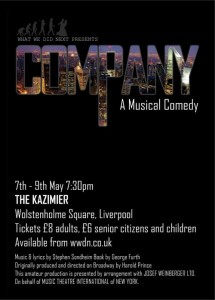 Stephen Sondheims Company is a musical comedy that looks at the lives of 5 married couples through the eyes of their bachelor friend Robert that explores issues of love and commitment, fear and longing.

Where: The Kazimier, Liverpool

Photos from Company can be found here.

As our first production Company might not have been an obvious choice. Sondheim’s skill of making intricate harmonies and rhythms seemingly simple to perform led us to choose the show. We soon found that the music was going to be an immense challenge, but it was a challenge which we rose to.

There were many lessons to learn for us from the very first steps of finding a cast and crew, through sourcing rehearsal space and a venue. We were overjoyed to be one of the first musical theatre companies to work in the Kazimier. We had to rewire the lighting rig to enable a properly lit show, bring in a lot of our own tech and promote a show in a venue which at the time was relatively unknown. The show was very well received and retains a special place in our hearts. We developed our trademark sense of being a professional amateur theatre company and set the foundations for our company.